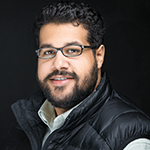 Harvard Business School - Programming For Non Programmers (once a semester)

I’ve taught/given over 100 classes or talks in the past few years many of which can be found here.